Germany has been Mexico’s nemesis for over three decades now, going way back to the 1986 World Cup in Mexico. Before their first-round game, Mexico had not beaten the unified German team (the last victory being a friendly over West Germany). On June 17th, 2018, Mexico finally made history knocking off the defending champions and number one ranked team in the world.

Mexico surprised Germany by its aggressive approach early. They advanced into the German area early and often in the first 15 minutes, forcing the German defense and keeper into numerous saves. In the 35th minute, just as Germany had begun possessing more of the ball, Mexico converted a German turnover into a full out break. Chicharito received the ball at half and made a quick pass to his right to Guardado, who passed it right back to Chicharito on a class give and go. Chicharito then dribbled forward at full speed before laying off a pass on the left wing to Hirving “El Chucky” Lozano. Lozano dribbled into the box and then cut the ball back to his right, eluding a trailing Mehmet Ozil before smashing the ball past Neuer just inside the left post. 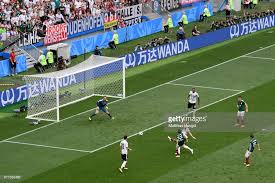 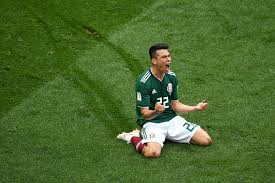 The key to the play was that Lozano outsprinted Ozil, racing from deep inside his own zone.  The Germans are a very disciplined team tactically, and rarely do they get exploited down the flanks. And even more hrarely do they get outworked. Most teams don’t take those chances because they then leave huge openings in their the back that the Germand take advantage of. But the fact is that in this play, Germany was exposed because Lozano simply outworked Ozil, who was left scrambling to catch up.

This play was emblematic of the entire tactical approach in this game. After recovering the ball, Mexico attacked as quickly as possible by outrunning the German midfield and defensive in order to apply maximum offensive pressure.

Germany’s coach Joachim Low plan was to double team players like Lozano as they made their runs forward into the offensive end. They knew that Mexico would make quick transitions but they were too slow to execute the defensive strategy.

But Mexico’s true hero had to be goalkeeper Ochoa, who frustrated the Germans the entire game. Shortly after Mexico’s goal, Ochoa saved a sure goal when he directed a free kick from Kroos into the cross-bar. It was simply an amazing save. And it was one of many. Mexico retreated to a more defensive posture in the second half and let Germany attack. The Germans ended with a 61-39% advantage in possession but Ochoa negated that by making 9 saves.

Juan Carlos Osorio, the coach Mexicans call “The Professor”, summed up his philosophical approach to this game: “The phrase was to play for the love of winning, not the fear of losing,” Osorio said after the game. “We were brave, and defended with our hearts.”