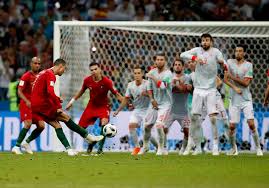 The Iberian Darby was a thrilling game worthy of a final. Instead it was the first game for both of these continental powers, and it got the World Cup off to a riveting start.

The best team of the early 2010’s vs the best player of the last three years was exactly how this game played out. Spain’s Diego Costa netted two goals and Nacho hit a screaming line drive which already has to be candidate for goal of the Cup. Meanwhile, Cristiano Ronaldo scored all three of Portugal’s goals: one on penalty, one on a low shot that DeGea muffed, and one on a glorious free kick at the end of regulation (also candidate for top goal). 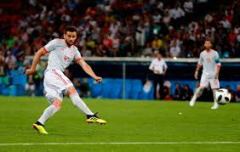 The dramatic game was played end-to-end with numerous lead changes. It was probably fair that it ended 3-3 as it won’t matter since both teams are going through to the next stage anyway. At this point, only positioning as 1 or 2 in the group needs to be finalized. Spain exhibited its version of the beautiful game — tiki-taka passing plus majestic tactical organization — and it was not affected by the sacking of its manager Lopetegui. Fernando Hierro was a natural as the last minute substitute coach. If you don’t follower soccer, you would not have noticed that he had just been put on the job 48 hours before kickoff.

Is there any doubt now that Ronaldo has eclipsed Lionel Messi as the world’s greatest player ? He just scored three goals in one game to add onto his 3 consecutive Champions League titles.

He is in such incredible form that he may be able to lead his team and get the only trophy missing from his trophy case.  I wouldn’t completely rule that out at this point.