Group B was not supposed to elicit much drama. Spain and Portugal were both considered the overwhelming favorites. Iran and Morocco were simply there to fill out the group. The Iberian Darby in the second day of the tournament had the ear markings of a semi-final or even a final. That game was supposed to be the highlight of the group.

The 3-3 draw between the two giants provided fireworks as promised. But they didn’t compare to to what happened in the final 10 minutes of the last group game, especially since both games were being played simultaneously.  Coming into the last game, Iran harbored the possibility of advancing to the next round if it beat Portugal. Spain had to also play for at least a tie to make sure it could get through in the event of a Portugal win or draw.

Morocco entered the game being mathematically eliminated and played very loose and took the game to the Spanish. A sloppy exchange between Iniesta and Ramos near midfield allowed Morocco’s Khalid Boutaib to steal the ball and dribble unimpeded 1-1 vs DeGea. He cooly slotted the ball into the corner of the goal for a suprising 1-0 lead. Spain responded quickly five minutes later when Isco scored from inside the goalie box after a typical well worked Spanish play.  But late in the game, Youseff El-Nessri outjumped Sergio Ramos and hit a thundering header to put Moroccco up 2-1. 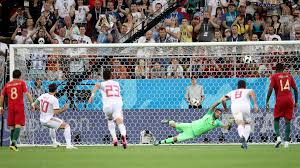 Meanwhile, in the other game, Portugal held a tenuous 1-0 lead until late on a beautiful goal by Ricardo Quaresma. Ronaldo missed a penalty that would have sealed Portugal passage into the next round as the group winner.  In stoppage time, Iran was awarded a controversial penalty kick by VAR, when the replay officials judged that the Iranian’s player header had struck the Spanish defenders hand in the box. Iran’s Karim Ansarifard hit a ball high into the right corner of the net to make the score 1-1. Iran still needed a win to advance because despite having the same number of points as Spain, they had a worse goal differential. In the 94th minute, Iran got a chance to win the game, but a volley struck the side netting. As it stood, it was Portugal #1, Spain #2 in the group. 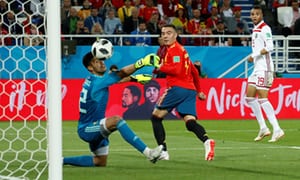 Back in the Spain-Morocco game, Spain scored an equalizing goal that was heavily also heavy reviewed by the VAR system, which judged that Spain’s Iago Aspas had not been offside as he flicked a cross from a corner kick into the goal.  With both ties, the positions flipped. It was now Spain #1 and Portugal #2.

The significance of that was that Spain will now face an easier path into the quarterfinals, having to play Russia, and the winner of Croatia vs. Denmark/Australia. On the flip-side, Portugal must now go through Uruguay in the Round of 16.

Argentina and Nigeria have been paired 5 times before in the same group. And every time, Argentina have never lost to Argentina. Argentina and Nigeria met again and played a final match in which Argentina had to win to advance (Nigeria could do so with a tie). Messi finally got a goal in the first half thad had Argentina into the next round. Then, in the 56th minute, Nigeria got the equalizer on a penalty kick by Victor Moses that put them back through. The PK came after a lengthy VAR review in which it was ruled that Javier Mascherano had fouled Leon Balogun inside the area.

With time running out on Argentina, Marcos Rojo, an unlikely hero scored on an impressive right footed volley off a cross that went pass the Nigerian keeper. After the goal, Messi rode on Rojo’s back during the celebration. In the stands, a visibly relieved Diego Armando Maradona, kissed a fellow fan before showing the middle finger and proclaiming the P word that the Mexican fans have been fined for to the Nigerian team. (He has been subsequently fined by  FIFA for this gesture.)

This time, after the victory, Messi and the rest of the Argentinian team, stayed a long time on the pitch, visibly relieved to have moved on despite a very poor group performance.

The final day of Group F play was as dramatic as it gets. As Mexico was losing 3-0 to Sweden late, I was certain that Germany would score the winning goal against South Korea that would put them into the next phase and Mexico would be eliminated. It is what you come to expect from the defending and four-time world champions.

But unanticipated events unfolded in Kazan. With Germany pressing for the goal that would get them through, they had some defending to do against a Korean side determined to play the spoiler role. While defending a South Korean attack, Tony Kroos, the hero of the Sweden game, attempted a pass out of trouble in his own zone, and when his errant pass nutmegged his own teammate, it fell straight to Kim Young-Gwon who kept his composure in front of the imposing Manuel Neuer, took a slight touch and roofed the ball into the right side of the net. After a VAR review, that goal was rescuing Mexico as Germany would now need to score two in the final 3 minutes to advance.

Now Germany needed two goals and it inexplicably put Manuel Neuer on the left wing instead of in his customary sweeper keeper position. Neuer gave the ball away rather easily, and after a 60 yard clearance by the Koreans, Son Heung-Min outraced the final defender to the ball and tapped it in for the second goal.  Why Neuer was so hopelessly out of position I will never know. It almost looked like a futsal flykeeper who gets put well into the opponent’s half.

Mexican fans mobbed South Korean fans all over Russia as their team had just allowed Mexico go to through. Their prize: they will play Brazil in the Round of 16.